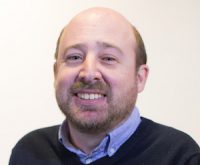 In the winter of 2005, I interviewed with Helen Zukerman, in the hope of getting involved with the Festival. She asked me, “how do you define a Jewish film?” Though I have forgotten my answer, I will always remember hers: “I know it when I see it.”

That answer has remained with me throughout my thirteen years programming for TJFF. Some Jewish films are easier to define, like films about the Holocaust, Israel, or Jewish religion and tradition. Some secular films are harder to pin down, but nonetheless are just as valuable, as they tap into the viewers’ self-recognition. Even if the word ‘Jewish’ is barely mentioned, there’s a familiarity to the family dynamics, the characters’ angst, and the films’ address to the dangers of fascism and racism. For example, the family dynamics in the film Viewer Direction Advised feel very ‘Jewish,’ even though its subject matter remains outside the purview of what traditionally might be considered a ‘Jewish film’.

The very thoughtful documentary about Lauren Bacall, by Pierre-Henry Salfati, includes footage of the actress reflecting on her early years of stardom, when she felt insecure about being Jewish. Exploring a movie star’s Jewish background often becomes a way for Jewish audiences to think about their own roots and place in the world. (As a side note, in Leona, a lovely Mexican film selected this year, an early scene depicts the title character and her family sitting around the dinner table, discussing which movie stars are Jewish, a game to which many Jewish families across the globe can probably relate.)

We also have a marvellous new film about the founder of Universal Pictures, Carl Laemmle. Stories about Jewish Hollywood moguls have always been a subject of great interest for me: the lore of Jack and Harry Warner and Louis B. Mayer offer wonderful perspectives of the Jewish American experience, through immigration, assimilation and pursuit of the American dream. The story of Carl Laemmle brings a new dimension to this subject, and this forgotten pioneer is finally given his due in James Freedman’s documentary, Carl Laemmle.

In addition to this wonderful documentary, we have programmed two early Universal films produced by Carl Laemmle and his son, Carl Laemmle Jr., with both films reflecting the ways in which their roots could be expressed within the Hollywood cinema of that era. The Cohens and Kellys (1926) presents a portrait of a Jewish family, which, on one hand, conforms to certain conventions within American Jewish cinema during the Twenties in its depiction of feuding Jewish and Irish families. On the other hand, the lead performances transcend the expectations of the era resulting in a lovely comedy that is still charming today. The second film, Little Man, What Now? (1934), is a love story starring Margaret Sullivan and set in Berlin on the eve of Hitler’s rise to power. This film is quite exceptional, considering the strong hesitation amongst Jewish Hollywood moguls to directly confront the situation in Nazi Germany.

One of the annual features of our Festival has been our Canadian archival series, which re-examines rarely seen works, redefining the canon of Jewish contributions to Canadian film and television, while also exploring the meaning and experience of Canadian Jewish identity. This year, under a new banner, “The Harvey Atkin Tribute to Canadian Media”, we continue our tradition with a look at Canadian Jewish comedy voices that emerged in the 70s and early 80s, including Ken Finkleman, Rick Moranis, Hart Pomerantz, Eugene Levy, Ivan Reitman, Marla Lukofsky, Mark Breslin, and Marjorie Gross, to name a few. This series also honours one of my favourite character actors, Marvin Goldhar, a terrific performer with a particularly ‘Haimishe’ presence.