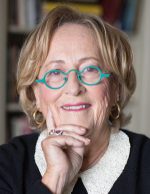 My opening address last year was about the launch of our free on-line streaming platform of films from past festivals.

As Barry Hertz said in The Globe and Mail article of April 27, 2017, The Toronto Jewish Film Foundation launched a “shtickle innovation” for its 25th year. Instead of a party for our 25th Anniversary, we decided to create something that would last. In honour of our 25th year, we created a platform with 25 films and launched it as an opportunity for Canadians across the country to watch some “oldies but goodies”. It was a trip down memory lane for us as we went through the old catalogues and selected films. We named the platform, j-flix.com.

We are so proud of what has happened with j-flix. We now have 80+ films on the platform, over 24,000 household views since its inception. 13,300 views in the last year, with 500 just in January. We cannot estimate the exact number of people who saw the films because we don’t know how many were watching each view. People from as far away as Nunavut and Yukon have signed on to watch some of our films. We plan on releasing a cross-Canada newswire blast to highlight the existence of j-flix to those that don’t know about it yet.

In addition, FilmMatters, our free student programme, curated by TJFF programmer and educational outreach coordinator Susan Starkman, has launched FilmMatters Online. Six of the past films and their related study guides are now available for teachers to access and use in the classroom at their own convenience. We are pretty proud of this accomplishment and many thanks goes to Jérémie Abessira, operations manager at TJFF for his commitment to designing the platform and making it work.

As a film festival presenter, we enjoy creating unique “experiences” that enrich our programmes. This year’s Canadian Archival series, now called The Harvey Atkin Tribute to Canadian Media, assembled by TJFF’s programme director Stuart Hands is a perfect example. Enhancing our programmes with panels and guests, give us a chance to interact with new people. That’s what we are all about.

Last year, I attended a One Day University afternoon and made a wonderful discovery. Marc Lapadula’s presentation gave a fascinating look at films and filmmakers that redefined cinema such as Casablanca, Orson Welles, Hitchcock, Mel Brooks, and the list went on. Marc Lapadula, playwright, screenwriter and professor of film at Yale, made me laugh, engaged the audience with behind-the-scenes tales of these films. He introduced us to a different way of film-watching. I asked him if he had anything to present for us about Jewish-content film… and he does! We are all in for a treat. Don’t miss his film masterclass on Sunday May 5th. You will not regret it. I have seen three of his presentations and loved them all.

And finally, I am often asked for suggestions on what to see at the Festival. My reply is that the films we screen are like my children/grandchildren – I love them all differently.

Here is a small list of films that affected me in this year’s line-up: Tel Aviv on Fire made me laugh, The Man Who Stole Banksy made me think about who owns street art, Joseph Pulitzer: Voice of the People introduced me to someone whose creativity was so ahead of its time, Sobibor blew me away, King of Börek made me hungry.

Most of all, each year as I write this entry, I think of all of you for whom we create the programme. Thank you for your ongoing support. You have made this Festival the success that it is.